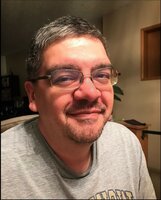 Daniel Hidalgo, 49, passed away Monday, January 10, 2022. Daniel was born August 6, 1972, in Greeley, the son of Daniel and Lucy (Carpio) Hidalgo of Greeley. A proud military veteran, Dan served in the U.S. Army, 25th Infantry, and enjoyed telling stories about his time in the service. He belonged to many veterans’ groups, including the American Legion, and online service-focused organizations, and was always there to help a fellow veteran in need. Last year, he volunteered with Task Force Argo, assisting with Afghanistan evacuation efforts. A 20-year veteran of the tech industry, Dan was a business analyst for Ring Central, who enjoyed everything to do with computers, and current technology. He was especially proud of the time he spent working for Sierra Nevada Corporation, as a data manager for the Dream Chaser space shuttle program. He also spent time in Chicago, working for Mercantec, and would recall his time there fondly for the rest of his life. His friends often came to him for help with their own computer issues, and he often served as a technical guru for any problem they might have. He loved movies, and had an extensive collection of films and TV shows from all over the world. He was always curious about the world around him, and the world at large, and loved to communicate that enthusiasm to those around him. Dan had a great sense of humor, and often sent memes to his friends and family, working hard to stay in touch, even when separated by long distances. He was devoted to his dog, Chevy, who was his constant companion. Dan was a loving father, and very supportive of his autistic child. He encouraged them to be the best person they could be, and he would spend time on the phone just acting silly to give them that outlet when they needed it. He will be greatly missed. Daniel is survived by his wife, Andrea (Workman) Hidalgo; child, Jennifer "Ashe” Hidalgo (21), of Idaho Falls, Idaho; stepchild, Keiri Janicki (19); and his sister, Nicole Hidalgo, of New York City, NY. He was always willing to help a friend in need, or to reach out with a joke, or just to check in. Funeral Arrangements are by Adamson Funeral Home of Greeley. A Celebration of Life will be held at the Greeley/Evans Moose Lodge 909, where he was a member. Interment will be at Linn Grove Cemetery, in Greeley. In lieu of flowers, the family asks that donations be sent to K9s for Warriors. More information about K9s for Warriors can be found at https://k9sforwarriors.org.