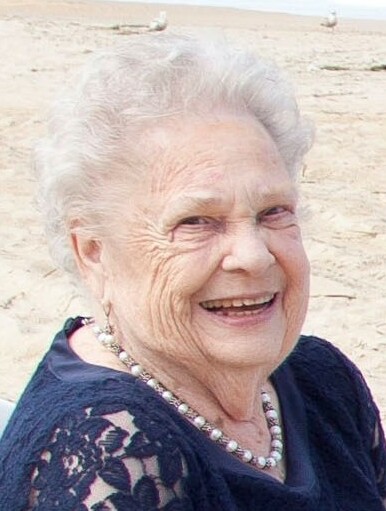 Nettie Anne was born December 1, 1929 in Perryville, Maryland to James Reynolds and Mildred Elizabeth (Bines) Bramble. On June 7, 1947 she graduated from Havre De Grace High School. On June 14, 1947 she married her childhood friend, Philip Frances Dupont Biddle in Perryville, Maryland. Nettie and Phil were very happily married until his passing in 1980. They had two daughters, Marsha Lynn and Elyce Anne.

She is survived by her daughter, Marsha Biddle of Greeley, CO, grandsons; Travis Shew of Longmont, CO and Ted (Amber) Klemetti of Finleyville, PA and twin great grandsons, Jack and Tommy Shew of Longmont CO and a special friend Desiree Kruise of Johnstown, CO. She was preceded in death by her husband Phil, her daughter Elyce, and her parents James and Elizabeth.

She attended the University of Maryland and graduated from University of Northern Colorado with a bachelor’s degree in business administration. She began her career in 1953 working in research and development in guided missiles with the Department of Commerce in Washington D.C. In 1960 the family moved to Boulder, CO and she began working for the National Bureau of Standards in Boulder. She became a section chief with the National Weather Service and retired in 1993.

Nettie was a member of the Trinity Episcopal Church in Greeley, Order of Eastern Star for 71 years where she served as worthy matron and grand officer for the state of Colorado. She lived in Johnstown for thirty years and belonged to the Garden Club and Woman’s Club. She moved to Greeley in 1993 and continued to be active in organizations including PEO and the Daughters of the American Revolution.

Nettie was all but born on the water. She grew up swimming across the Susquehanna River, eating blue crabs, admiring Canvasbacks, sailing, and was given a speed boat for her 16th birthday. Many of her hobbies, desires, and habits were born in Maryland, shared with all, and stayed with her till her last day. She enjoyed traveling and cooking. She loved people and knew no strangers, but family was most important to her.

Services will be held at Trinity Episcopal Church in Greeley on Wednesday April 20, 2022 at 10:30 A.M followed by lunch. Interment at the Johnstown Cemetery.  Memorial contributions can be made in her name to the “Humane Society of Weld County” and the “Greeley Philharmonic Orchestra” in care of Adamson, 2000 47th Ave., Greeley, CO 80634.  Friends may leave condolences at AdamsonCares.com.