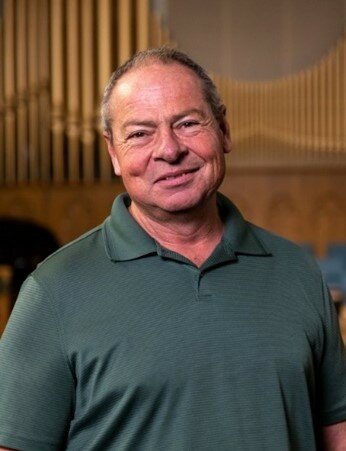 Dennis Ray Rutz, 61, of Greeley passed away suddenly at his home on February 21, 2022.  He was born on January 13, 1961 in Torrington, WY to Harold Raymond and Lydia (Weber) Rutz where he grew up and graduated from Torrington High School in 1979.

On March 15, 1986, he married Dana Kay Bartlett in Torrington.  On their first anniversary he gave his bride a single rose and told his mom he intended to do that every year, adding another rose for each year of marriage.  He held true to his promise, celebrating 35 years on their last anniversary.

Dennis farmed and ranched with his family starting at a young age until 1986 when his father retired.  From 1987-2019 he worked at Golden Aluminum in Fort Lupton as a Millwright.  His experience as a farmer and years of fixing things with bailing wire and whatever was in the barn prepared him for his career.  He was semi-retired and was currently working as the Facilities Manager at Cornerstone Community Church.  This was his dream job, meant to transition him to full retirement.  He loved working behind the scenes to make sure the church was clicking along without interruption.

A handyman extraordinaire, Dennis loved tinkering with anything that wouldn’t work; lawnmowers, chain saws, appliances, you name it.  Nothing was too big a challenge for him, you break it, he’d fix it.  Google was his friend!

His children were his world.  He was involved in every event as they grew up and it didn’t stop after they became adults.  When each of them purchased their first house, he helped make it a home by working side by side with them on all their projects. He was only a phone call away.

Their cabin on Storm Mountain was his happy place.  He loved finding better ways to do everything.  Building furniture from fallen trees on the property, improving the solar system, running his tractor around the property, it didn’t matter.  It was his little slice of heaven.

Dennis never settled on one hobby.  He’d decide on his next challenge, master it and then move on.  His most recent hobby was rebuilding vintage axes.

Dennis’ faith was very important to him.  At a young age, his parents instilled the importance of a relationship with Christ.  He loved to share memories of his early years at First Congregational Church in Torrington.  At the time of his death he was a member of Cornerstone Community Church having joined in 1992.

Thankful to have shared his life are his wife, Dana of their home in Greeley, children; Danielle Rutz of Greeley and Darren Rutz of Wellington, sister, Diana Rutz of Gillette, WY.

He was preceded in death by his parents and a sister, Donna Rutz.

To send flowers to the family or plant a tree in memory of Dennis Rutz, please visit Tribute Store
Saturday
5
February

Share Your Memory of
Dennis
Upload Your Memory View All Memories
Be the first to upload a memory!
Share A Memory
Send Flowers