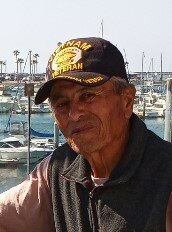 Jose Luis Gonzalez, 75, of Greeley, passed away February 26th, 2022 at his home surrounded by his loved ones. He was born February 17th, 1947 to Jesus Luna Gonzalez Sr. and Anita Tovar in Tijuana, MX. Jose grew up in San Ysidro, CA where, at the age of 9, his father taught him how to work with concrete. He graduated from Mar Vista High School. Jose, or Joe as he was known, joined the US Army in 1966. He honorbaly served in the Vietnam war and received the National Defense Service Medal. After his service, Joe continued his work in concrete and construction. He knew how to build a house from the ground up. He was also experienced in the food industry. At one point he opened the first mariscos restaurant in southern California and then, later, he was the owner of Tacos Del Norte in Greeley, CO. There he was both a business owner and an excellent cook. For the most part, Jose spent most of his professional career in the concrete and construction industry. He owned and operated his own business “Joe’s Concrete” for many years and it was only recently that he retired from that work.  Joe was married to Suzan Gonzalez. The pair got married on February 14th, 2004 in Greeley, CO.

Jose was a proud veteran and a very hard worker. He was extremely gifted in mathematics and had an incredible memory. He loved seafood, listening to all kinds of Mexican music or oldies, and cheering on his favorite boxer, Canelo. Most of all he loved and cherished his family.

Joe is preceded in death by his parents, Jesus and Anita Gonzalez, and his brothers; Henry Joseph Gonzalez, Raymond T. Gonzalez, and Cruz Gonzalez, his in laws, Maria Velasquez and Felix Medina.

In lieu of flowers the family requests that memorial contributions be made to Joe’s funeral expenses in care of Adamson Life Celebration Home; 2000 W 47th Ave., Greeley, CO 80634.

To send flowers to the family or plant a tree in memory of Jose Gonzalez, please visit Tribute Store
Thursday
10
March

The Recitation of The Rosary

Share Your Memory of
Jose
Upload Your Memory View All Memories
Be the first to upload a memory!
Share A Memory
Send Flowers