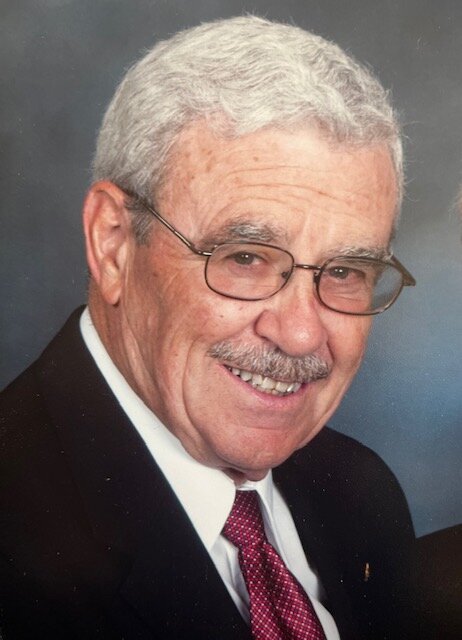 Norman Donald Noe was born on July 5th, 1931, to Fred and Maxine Noe (Grout) in Denver, Colorado, and passed away peacefully on April 10th, 2022, in Greeley, Colorado. He was raised in a happy and loving home but experienced an illness at a young age which made him stronger and knowing he could beat anything by being humble and optimistic. Norm’s family moved to Greeley, Colorado in 1936, where he ended up creating his legacy. Norm attended Greeley Public Schools and graduated from Greeley High School, received his B.A. in Iowa at Grinnell College, and completed various business courses throughout his professional career. While attending Grinnell College, Norm met his future wife, Marty Strovers, and on April 16th, 1955, they were wed at the Park Congregational Church in Greeley. They were married for 67 wonderful years.

Norm returned to Greeley after college and in 1954, went into business with his father at Fred W. Noe Insuror, which became Noe Insurance Agency. In 1972, he merged with Edgar (“Lefty”) Bartels to create Bartels and Noe Agency, where he continued serving Greeley until his retirement in 1996. He was also part of a team that formed Pioneer General, a Surety Bonding Company, where he served on their Board of Directors until the company was sold.

Norm’s life in public service began early when, in high school, he was selected as Lt. Governor at the first Colorado Boys State. In 1953, he was a youth delegate to the International Congregational Council in St. Andrews, Scotland. His big personality always left people feeling included, loved, and inspired. Not only was he a leader, he was a proud servant of the community. Norm was a Greeley Jaycees member and statewide Vice President, President of the Boys and Girls Club of Greeley, member of the Greeley Independence Stampede Committee, member of the Historical Society of Northern Colorado, a founding member of the Community Foundation of Greeley and Weld County, one of the organizers of the Peak View Jazz Club, and an active member of the Centennial Rotary Club where he contributed to many of their international projects. He was also a member of the Masons, Consistory, Shrine, Elks, and Caledonian Society. He also sat on City of Greeley Parks and Recreation, Traffic, and Museum boards. Norman’s professional organizations included Greeley Weld Insurers, Colorado Insurers Association (Board Member), and National Association of Surety Bond Producers. He served his church in many capacities including being the Church Moderator and, through the Mended Hearts hospital program, he counseled many people going into open heart surgery – something he had experienced himself.

No matter the obstacle he faced, whether it be illness or daily life, he always prevailed. Norm was an avid reader, dabbling in every genre – anything that had a cover – although he did favor history books on the Civil War. His curiosity and thirst for knowledge paved the way towards his expansive career and his active participation in Greeley’s community. His mind was always sharp.

Norm was a family man. He greatly enjoyed watching his kids and grandkids play in tennis matches and band concerts, and compete in swim meets, high school football, volleyball, track meets, and ice hockey games. Some of the recreational activities Norm loved were camping in the mountains, fishing on the North Platte River in Wyoming, cheering on the Broncos (he and Marty held season tickets since 1968), and watching the Rockies play. As a friend of his lovingly shared on social media, Norm lived a life of purpose and service to all he met.

Norm is survived by his loving wife Marty, children David (fiancée Jo Ann Jarreau of Athens, Alabama), Jeane (husband Michael and daughter Hanna of Nederland), Steve (wife Angie) and their sons Craig, Matthew, and Chad (wife Natasha of Ridgefield Washington and their children Siena and Jason), and his sister, Mary Pollock of Portland, Oregon. He was preceded in death by his parents and grandparents.

In lieu of flowers, contributions may be made to the Weld Community Foundation, the First Congregational Church of Greeley, or the Boys and Girls Club of Weld County.

To watch the Celebration of Life live please click this link : https://youtu.be/m2SLGqqH-6A

The Celebration of Life will be held on May 6th, 2022 at First Congregational Church at 11:00 AM.

To send flowers to the family or plant a tree in memory of Norman Noe, please visit Tribute Store

Share Your Memory of
Norman
Upload Your Memory View All Memories
Be the first to upload a memory!
Share A Memory
Send Flowers