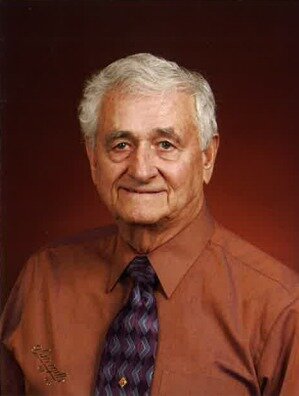 Earl Eugene Stewart of Greeley, Colorado left the world peacefully with family by his side to join his beloved wife of over 65 years, Shirley, in Heaven on May 14, 2022. Earl was born on January 7, 1934 to Lawrence and Ardys (Kelley) Stewart.

Earl has always been a hard-working man. He enjoyed being in classes where he was able to work with his hands, especially woodshop, while also playing on the basketball team at Greeley High School. Shortly after he graduated in 1952, he joined the U.S. Navy and was first stationed in Japan during the Korean War. His next assignment was recruiting duty in Omaha, Nebraska, where he met the love of his life and married her on July 27, 1956. His last duty station was in Oahu, Hawaii. After 10 years of serving for his country, he returned to Colorado to help with the family farm, as well as begin to grow his family with Shirley. He continued to work many different jobs throughout his life, including:  metal buildings, sales, and Colorado Animal Research. After retirement, Earl and Shirley spent their days: traveling, visiting family and friends, relaxing in the mountains, and helping their grandkids learn and grow.

Although he was a very humble man, Earl was a jack-of-all trades and perfected everything he set his mind to. A few of his many talents were: building grandfather clocks, building and playing instruments, painting, photography, creating stained glass artwork, making jewelry with stones, customizing leather wallets and bags, and crafting beautiful wood art and pens. He was also a great handyman in his own home, in addition to helping his family with: plumbing, carpentry, fixing sprinkler systems, and even crafted his kid’s bedroom furniture. No matter what, Earl was always a phone call away and would drop whatever he was doing whenever his family or friends needed help. He was a selfless man, sometimes stubborn, and often did these things for people out of the kindness of his heart.

During his free time, Earl also enjoyed: golfing, bowling, gardening, fishing, bird watching, singing “oldies,” and helping his grandkids learn how to play many sports. He never missed any of his kids’ or grandkids’ several school activities and sporting events. He was always on the sidelines cheering on and supporting his loved ones. He was a die-hard Broncos fan, and loved watching them and the Colorado Rockies on TV with Shirley sitting close by. Whenever his favorite teams were not on, he loved watching shows about saving animals. He had the biggest heart, and would spoil not only his own pets, but his family’s pets that he enjoyed taking care of whenever necessary.

Earl was a member of the VFW in Ault and United Methodist Church of Eaton for over 50 years.

He is survived by his children Valerie Bartow (Tim), Corey Stewart, grandchildren Travis Ehrlick, Chevelle Ehrlick, Dustin Stewart, and Kylee Stewart. He is also survived by his siblings Larry Stewart of Briggsdale, Colorado, and Jacques Gerard (Sylvie) of France, along with many family members.

He is preceded in death by his beloved wife Shirley Stewart, his parents (Lawrence and Ardys), and siblings Louise Hall, Lois Barnaby, and Robert Stewart.

A Celebration of Life Memorial Service will be held at Adamson Life Celebration Home on June 6th, 2022, at 10:00 AM with a reception to follow immediately after.

Those wishing to do so may make memorial contributions to the Wildlife Animal Sanctuary.

To send flowers to the family or plant a tree in memory of Earl Stewart, please visit Tribute Store

Share Your Memory of
Earl
Upload Your Memory View All Memories
Be the first to upload a memory!
Share A Memory
Send Flowers