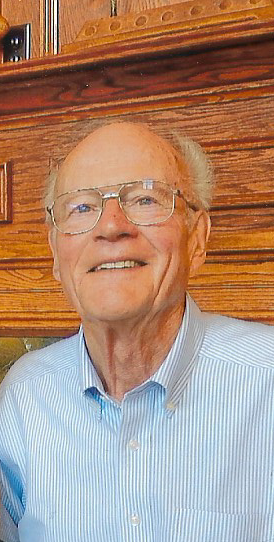 The Reverend Donald R. Laue, 87, of Greeley, died August 21 2022, at Grace Pointe Assisted Living in Greeley, Colorado. He was born on August 6th, 1935 to Dr. Roy A. Laue, D.D.S and Jane H. (Little) Laue in River Falls, Wisconsin. He graduated from River Falls High School in 1953. He continued his education at Wisconsin State College (now the University of Wisconsin-River Falls), graduating in 1957 with a Bachelor's degree in Secondary Education in the field of English. He then attended Divinity School at Yale University, graduating with a Masters in Divinity in 1961.

The central purpose of Don’s life after retirement was his wife, children, and seven grandsons. He was a strong and loving presence in their lives. He spent the last almost 40 years attending the sporting events and school activities of his "boys," never missing an event. He and Marlie enjoyed traveling the United States, and several trips abroad. Wherever he was or whomever he was with, conversation was an essential part of his life.

Throughout his life, Don took great joy in playing and watching sports.  In high school he played football, basketball, baseball and ran track. He was a longtime baseball umpire, officiating high school, legion and college games. He was a lifelong fan of the Green Bay Packers and St. Louis Cardinals. He loved to discuss sports with his grandsons and had an encyclopedic knowledge of sports history.

The service will be livestreamed at https://www.youtube.com/watch?v=bGMiwzXfd_I

To send flowers to the family or plant a tree in memory of Rev. Donald Laue, please visit Tribute Store
Sunday
4
September

Share Your Memory of
Rev. Donald
Upload Your Memory View All Memories
Be the first to upload a memory!
Share A Memory
Send Flowers