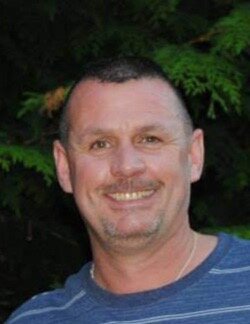 Charles “Charley” Theodore Elliott, 51, of Kersey, CO passed away August 18, 2022 at UC Health in Greeley CO. Charley was born November 3, 1970 to Ronald Elliott and Diana Turner in Greeley CO. He grew up in Evans CO and graduated from Greeley West High School. He attended college in Sheridan, WY. Charley served in the United States Navy during the Persian Gulf War as a machinist/repairman on the USS Kitty Hawk aircraft carrier and was very proud of his service. He worked at Hugh M. Woods for many years in Greeley, the City of Evans, University of Northern Colorado, and the Sheridan, WY Veterans Hospital. Charley enjoyed working on his 1965 Tempest, camping, bow hunting, and the outdoors. He enjoyed all sports and was a fan of the Fast & Furious movies and had a collection of the cars from the movie. Charley most enjoyed time spent with family and friends. He is survived by his parents; Ron and Pam Elliott of Kersey and Diana and Glenn Griffin of Greeley, his children; Taylor Sorenson of Silverdale WA and Madison Elliott of Windsor CO; his brother, Dan Elliott and wife Treina of Windsor CO, and step-siblings; Becky (Branden) Roush of Cleveland, TX and Bradley (Hillary) Johns-Parson of Alexandria, VA and numerous Aunts, Uncles, Cousins, Nieces, and Nephews. He was preceded in death by his grandparents; Arthur and Esther Elliott, and Gerald and Mary Turner, and his Uncle Ted Elliott. A Life Celebration will be held on September 12th at 1:00pm, at Generations Church 3600 W 22nd Street, Greeley, CO 80634.  A private inurnment will be at Fort Logan National Cemetery.

To send flowers to the family or plant a tree in memory of Charley Elliott, please visit Tribute Store
Monday
12
September

Share Your Memory of
Charley
Upload Your Memory View All Memories
Be the first to upload a memory!
Share A Memory
Send Flowers