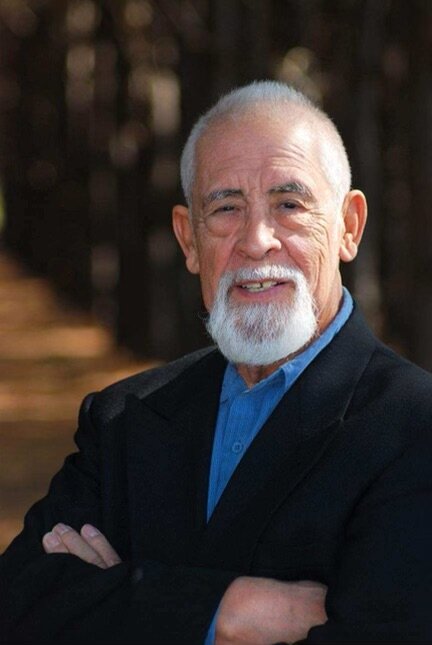 John R. Ochoa 7/27/1932 to 8/27/2022 (90) passed away peacefully at his home. He was born in Gill, Colorado. His parents were farm laborers, so John worked in the fields as a kid when he wasn't going to school. He attended Greeley High School. He worked with his parents in the fields around Greeley till he was a teenager when he took a job working for the Union Pacific Railroad in Wyoming. He soon decided working in the elements all day then sleeping in a boxcar at night with a bunch of grown men wasn't the life for him. He returned to Greeley and worked in scrap yards like Winograd's and Gold's, and at the alfalfa mill in La Salle. He married Erlinda Gomez in 1952. He was working at the missile sites in Nebraska where he would work a week at a time, sleeping in his station wagon and later in a camper he built out of an old truck bed, and returning home on the weekends. He joined the Navy May 4, 1953, one of the best decisions of his life, he later recounted. He went to Corpsman school. He was first stationed at Balboa Naval Hospital in San Diego, California. He found an apartment near the hospital for him and his family where he could walk to work, and they could walk to Balboa Park in the evenings and weekends. Later he was stationed at Long Beach Naval Hospital in CA, then Treasure Island and Alameda Naval Air Station in the San Francisco Bay Area. From there he was assigned to the U.S.S. Hornet CVS 12. While serving aboard the Hornet he visited many places in the Far East, Australia, and Mexico where he served as an interpreter for the Navy in Mazatlán for several days. During 1965 to 1966 he and the Hornet were in the Gulf of Tonkin off the coast of Viet Nam. There they lost two aircraft and 4 pilots to enemy gunfire. He mourned and prayed for his lost shipmates till the end of his life. Upon returning to the U.S., he was transferred to Olathe Naval Air Station in Kansas where he served as Corpsman and X-Ray technician. He ended his active duty there then served in the Navy Active Reserves till his retirement in 1981. During his reserve time he worked for School District 6 in Greeley and attended Aims Community College where he attained his AA degree. He had planned on continuing at UNC to become a teacher, but a better opportunity presented itself: Kodak. He worked at Kodak and retired in 1991. Later he was a realtor at Real Estate Connections and worked as a handyman for several years. One of his passions later in life was serving as a Volunteer Chaplain at North Colorado Medical Center where he would help comfort patients in their time of need and pray for and with them. He loved fishing, playing golf, and the Denver Broncos. There were many days where he would play 18 holes at Highland Hills, stop for lunch, then play 18 holes at Boomerang. He enjoyed spending time with his whole family. He was also very proud to be a member of Knights of Columbus. John was a proud American Patriot who served his country and community for many years. He will be missed by all who knew him. God Bless you, Dad, Rest in Peace.

He is preceded in death by his wife Erlinda Ochoa, parents Jesusita and Gustavo, and sister Lydia Rendon.

To send flowers to the family or plant a tree in memory of John Ochoa, please visit Tribute Store
Tuesday
6
September

RECITATION OF THE ROSARY