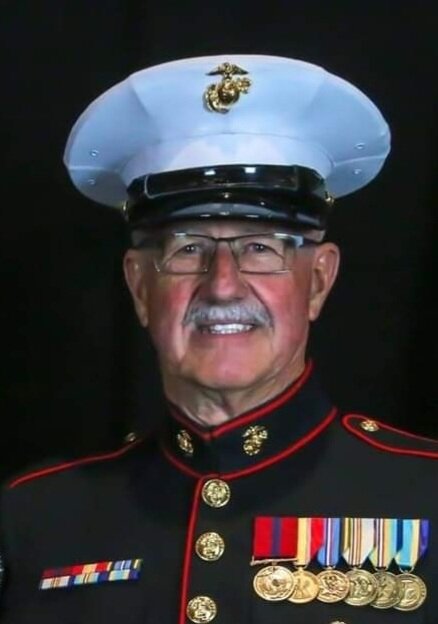 James “Jim” R. Kepler, 79, of Greeley, passed away Thursday, October 13, 2022 at his home.  Jim was born on July 12, 1943 in Scottsbluff, Nebraska to Hollis “Holly” and Frances (Filbin) Kepler.  Jim grew up in Fort Collins and graduated from Fort Collins High School in 1962.  He then joined the United States Marine Corp and served until 1966.  On July 24, 1971 he married Leona Penner in Lacombe, Alberta Canada.

Jim worked as a Fort Collins Police Department Reserve Officer, owned Kepler Lighting for 12 years in Greeley, worked at Snapon Tools, NCR as a Field Engineer, and most recently was a Real Estate agent for the Group and Pro Realty.  He was very active in the community.  He was the founder of the Marine Corp League in 2001, a member of the Evangelical Free Church in Eaton, a member of Kiwanis Club of Greeley, involved with United Way, traveled on the Honor Flight, and involved with Gideon’s.  He enjoyed restoring vintage cars, skiing, hunting, and enjoyed watching his grandchildren play sports.

Jim is survived by his wife Leona Kepler of Greeley; children; Holly Rice and husband Scott of Broomfield and Jonathan Kepler and wife Susie of Richmond, Texas; his grandchildren, Kenley and Chase Rice of Broomfield and Jackson Kepler of Richmond, Texas; his sisters, Kay Edwards and husband Larry of Fort Collins and Carol Story of Fort Collins; and his sister-in-law, Hedie Coyne and husband Ron of Olds, Alberta Canada.  He was preceded in death by his parents.

A visitation will be held 6:00pm – 8:00pm Thursday, October 20, 2022 at the Evangelical Free Church in Eaton.  A Life Celebration will be at 2:00p.m. Friday, October 21, 2022 at Evangelical Free Church in Eaton.  Inurnment Fort Logan National Cemetery.  Memorial contributions may be made to the Marine Corp League, the Missions at E-Free Church, or Gideons International in care of Adamson Life Celebration Home, 2000 W. 47th Ave., Greeley, Colorado  80634.

To send flowers to the family or plant a tree in memory of Jim Kepler, please visit Tribute Store
Thursday
20
October

Share Your Memory of
Jim
Upload Your Memory View All Memories
Be the first to upload a memory!
Share A Memory
Send Flowers