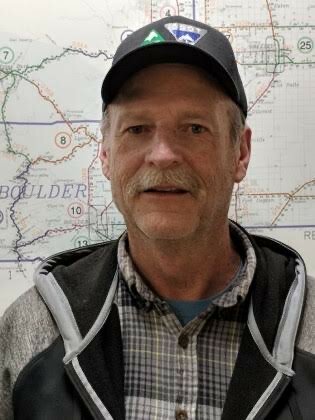 Lee Kellogg Groves, 68, of Windsor (formerly of Ault, CO) passed away after a brief illness on October 25, 2022 in Greeley.  He was born October 4, 1954 in Fort Morgan, CO to Vernon Winfield and Elinor Gayle (Rickel) Groves.  He was raised in Brush and graduated from Brush High School in 1973.

After high school, Lee worked construction jobs for various companies. He attended AIMS Community College and graduated with an Associate of Science in Civil Engineering.  He began his career at ARIX, Norton Underwood and Lamb and in 1991 with CDOT.  He became a Licensed Professional Surveyor in January of 2000.  He retired in 2020 and then was a consultant with CDOT in retirement.

As a land surveyor, Lee loved his job and the prairie, traveling every square inch of eastern Colorado knowing the land depths far and wide.  Lee also enjoyed annual trips with family and friends to many places in the US, Canada, Mexico and Costa Rica. A couple of his favorites were Hilton Head Island and Alaska. He and his wife just returned from a multistate road trip that included the upper peninsula of Michigan.

Lee was a sports enthusiast, especially basketball, and was a family man. He cherished the time spent with his children and grandchildren. The highlight of his life was coaching his son in many sports and attending all the sporting activities of his very active son and daughter. He loved the Ault community and continued involvement by running the chains at the Ault High School football games.

Lee was proud to be a regular blood donor with the NCMC blood bank.

He was preceded in death by his parents.

A private family graveside service will take place at Lakeview Cemetery, Windsor.  Lee’s Life Celebration will be an open house held from 2-5 p.m. Friday, November 4, 2022 at the Windsor American Legion.  Memorial gifts may be made to the charity of choice in care of Adamson, 2000 47th Ave., Greeley, CO 80634.  Friends may leave condolences at AdamsonCares.com.

To send flowers to the family or plant a tree in memory of Lee Groves, please visit Tribute Store
Friday
4
November

Share Your Memory of
Lee
Upload Your Memory View All Memories
Be the first to upload a memory!
Share A Memory
Send Flowers