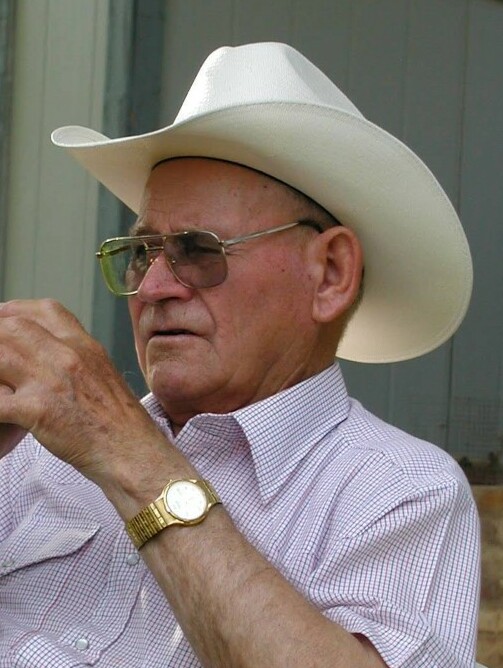 Harold was born July 27, 1925 in Loveland, Colorado.  He was the youngest son of David and Elizabeth (Bidek) Drieth, immigrant Germans from Russia.  Harold passed from this life on Thursday, December 15, surrounded by his family.

Harold was raised on farms near Loveland and Johnstown until his family moved to Minatare, Nebraska.  Harold married Irene Rusch in Scottsbluff on November 24, 1948.  Harold continued to farm with his father at Minatare until the opportunity came to farm on his own.  Harold & Irene moved to Greeley, CO in 1952 where they farmed the land that is east of the Greeley Country Club golf course.  In 1955 they again moved to a farm west of Ault, and then to a farm on the corner of I-25 and Vine Drive in Fort Collins. In 1963 the family moved to the Thornton farm south of Windsor.

Harold was a top ten beat producer at the Fort Collins and Windsor Farms for ten years and he began to breed a herd of registered Black Angus and Limousine cattle. In 1974 Harold was able to realize his life-long dream of owning his own farm and ranch in Pine Bluffs, Wyoming.  With son David, they began the Drieth Hay Stacking business.

In 1979 Harold retired from the ranch and moved back to Antelope Hill outside of Windsor.  He and David continued the hay stacking business with each of them running a machine, until grandson, Brian Hettinger, began working with David.

Harold and Irene moved into the custom home they built in Windsor and enjoyed spending time with his family and friends.  He was known for having the best lawn in the neighborhood and never stopped farming with his raised bed garden in the back yard.  He supplied his family and neighbors with his favorite vegetables: zucchini, tomatoes, and cucumbers.

In January 2020 Harold and Irene moved to Park Regency in Loveland and then in August 2022 they moved to Grace Pointe Assisted Living in Greeley.

Harold was a hard worker and great provider for his family. He instilled a strong love of the Lord in his children and grandchildren and the importance of God and serving in a church community.  He was a founding member of Faith Church in Windsor.

Harold and Irene celebrated 74 years of marriage on Thanksgiving Day with family.

A visitation will be held from 12’noon to 1 p.m. followed by his Life Celebration at 1:00 p.m. Wednesday, December 20, 2022 at Faith Church of Windsor, 1020 Walnut St. Interment at Lakeview Cemetery with a reception following back at the church. Memorial gifts may be made to “Pathways Hospice of Weld County”, 4075 W. 11th Street, Greeley, CO 80634 or “Faith Church”, 1020 Walnut Street, Windsor, CO 80550. Condolences may be shared at AdamsonCares.com.

To send flowers to the family or plant a tree in memory of Harold Drieth, please visit Tribute Store
Wednesday
21
December