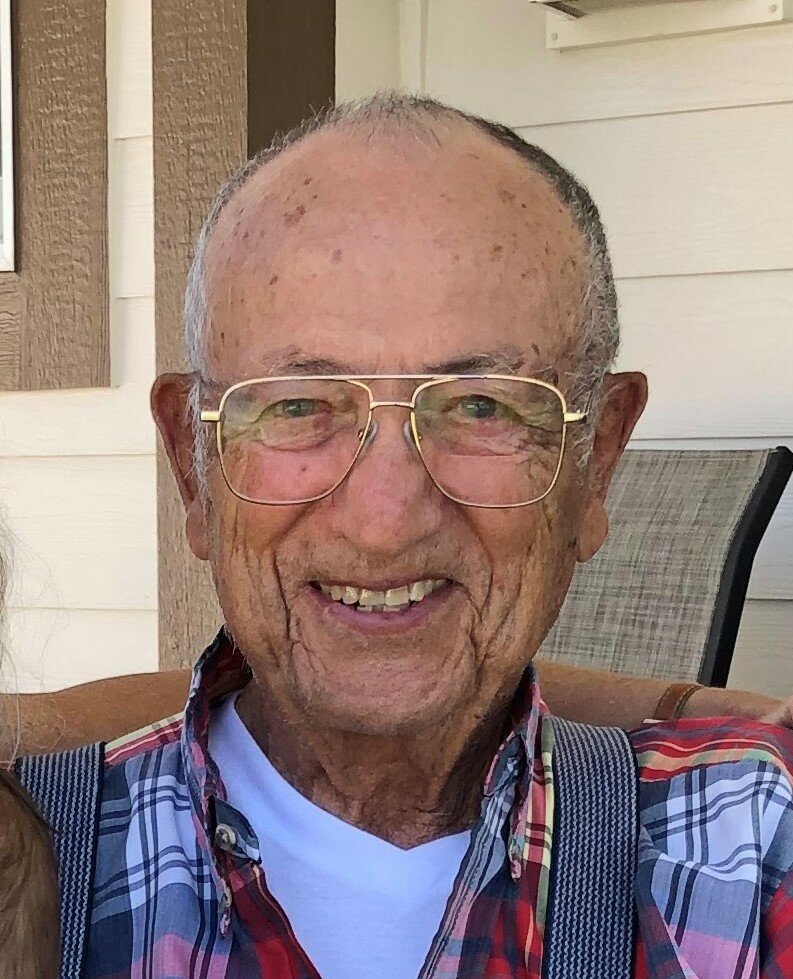 Harry was born in Windsor, Colorado to Alexander and Anna Roth on March 27, 1926. Harry was raised along with his six brothers and four sisters on the family’s farm near Grover, Colorado. Upon his high school graduation, he enlisted in the United States Navy where he dutifully served his country as a Radioman Third Class in WWII until the conclusion of the war. It was upon returning home after the war that he began his lifelong association with automobiles. After being a mechanic, he opened Harry’s Auto Sales in west Greeley where he loved buying and selling. Harry also owned and, alongside Georgia, operated 9th Avenue Auto Wrecking in Greeley for many years. Harry enjoyed car racing, whether it was being a race car driver in his early years, cheering on his favorite stock car drivers, or challenging his kids and grandkids at go-kart racing, he loved it all. Some of Harry’s happiest days were while selling farms and ranches for Scott Realty with his lifelong friends, which ultimately led to him purchasing and farming his own land not too far from his childhood homestead near the Pawnee grasslands in northeast Colorado. Harry was always ready to go fishing and hunting with family and friends, fix you a “pump”, or spend time playing cards and slot machines during his retirement years in Las Vegas. He lived a very full life.

Harry is survived by Georgia Roth, his loving and caring wife of 43 years, his brother Ray Roth of Greeley, his five children, Sandra (husband Mike) Frederick of Greeley, Patty (husband Mark) Bower of Copperopolis, CA, Daniel (wife Teri) Roth of Portland, OR, Chris (wife Kathy) Minear of Windsor, CO and Brian (wife Kirsten) Minear of Southlake, TX. He was a proud grandfather of 12 and great-grandfather of two. He is preceded in death by his parents and nine siblings.

A memorial service and luncheon will be held on February 4, 2023 at 11am at Adamson Life Celebration Home in Greeley. Harry’s wish of having his ashes scattered at the Pawnee Buttes in northeast Colorado will take place afterwards.

Memorial donations may be made to Banner Hospice of Northern Colorado. The family wishes to extend their gratitude to the social workers, nurses, and caregivers of Banner Hospice for making the final months so comfortable for both Harry and Georgia.

Harry led an incredibly diverse, fun, long, and fulfilling life. He was a friend to everybody he met, and was always such a loving, positive, and fun influence for everybody around him. He is a true example of how to lead a tremendously full and happy life

To send flowers to the family or plant a tree in memory of Harry Roth, please visit Tribute Store
Saturday
4
February

Share Your Memory of
Harry
Upload Your Memory View All Memories
Be the first to upload a memory!
Share A Memory
Send Flowers